More commonly known as the Golden Pavilion, Kinkaku-ji is one of Kyōto’s (and Japan’s) most recognizable landmarks. This stunning golden building is set in an equally stunning sculpted garden in the north west of Kyōto.

It sits upon a large pond within the garden and the calm waters reflect the building perfectly allowing for some beautiful pictures. The extensive Zen garden is designed to represent the Western Paradise of the Buddha Amida and the largest island in the pond is said to represent the islands of Japan. You could easily spend a full day wandering around the temple grounds and taking in the beauty and harmony of the place.

Kinkaku-ji was originally built early in the Muromachi period at the end of the 14th century. It was purchased by the then Shogun, Ashikaga Yoshimitsu who used it as a retirement home. He was responsible for many upgrades including the commissioning of the garden. Upon his death, it was converted to a Zen temple called Rokuon-ji (it’s official name) by his son.

The current building only dates back as far as 1955 after it was burned down by a monk suffering from a mental illness. It was rebuilt as close to the original design as possible, using gold leaf imported from Kanazawa. 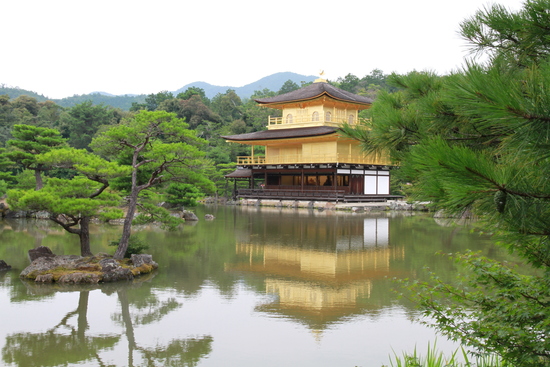